Get your new and hot Foot-Fetish Clips here - Now!

Mistress Venus learned that her slave had lost her items. She did not appreciate having a careless slave so she punished him and made sure he would not be careless again. She used her smelly feet to punish him. His duty was to first of all smell her feet and then lick them. She wanted him to lick her feet which were dirty and smelly. After that punishment, he was never careless.

Mistress Jessika loves her high heels and she wanted to use them to humiliate her slave. They were new and she had never used them to punish him. She had been waiting for him to mess up and he did mess up that day. So she humiliated him cruelly and forced him to lick them. Once he was done licking them, she made him smell them as well. She was trying to avoid trampling him.

This mistress likes getting her feet dirty or sweaty. But it is not because she is a dirty mistress but because she likes to use her dirty feet to humiliate her slave. She always does it as a way to punish her slave but today she was bored and her slave had not messed up so she looked for a scapegoat and humiliated her slave using her sweaty and smelly feet.

This mistress was seated in the park minding her own business when she realized that this guy was checking her out. In a short while, he approached her. She decided to play a game at his expense. She flirted with him and he liked it. She became naughtier and he liked it. She then crushed a small pumpkin with her feet and she asked him to lick her feet in public claiming it would turn her on. 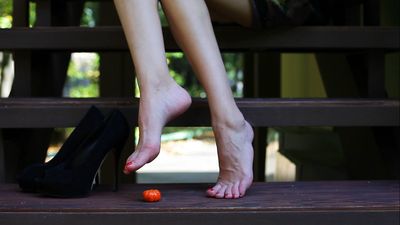 Goddess Antonella and her foot fetish

Goddess Antonella has a thing for feet. She likes using her feet to have fun and today she wanted her feet licked. To make it even more interesting, she ensured her feet were smelly and sweaty before she got someone to lick them. She enjoyed as the guy did it thinking he was turning her on. She was having fun but she was not getting turned on even a little bit. 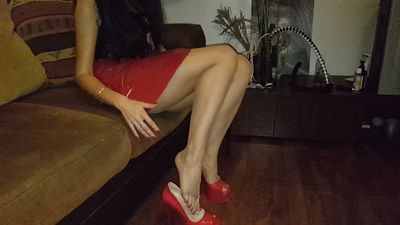 Princess Serena and her foot fetish

Princess Serena caught this guy checking her out and she knew she had someone to humiliate. She is one of the mistresses who prefer humiliating guys they meet instead of slaves. She likes to make it a challenge and that is why she does not like to do it to slaves. She finds slaves too easy for her liking. She flirted and got this guy hooked to her naughtiness then made him lick and smell her smelly feet and give her a rub.

Mistress Miranda deceives even the best of them

Mistress Miranda likes to use her sweaty and smelly feet to humiliate. She has a foot fetish and anytime for her is humiliation time. She made her slave lick her shoes and her feet and when she was done she was forced to chew the socks. He struggled but there was no recourse. He had to do all she wanted and hope he would be given special treatment from the others.

Mistress Parmelia was seated on her couch watching television when she realized that she had not removed her shoes as well as her socks. She called her slave and she made him remove them and when she was done, she made him lick and smell both her feet as well as her shoes. He did a fine job till his mistress pitied him and forgave him but he had to finish chewing the socks first.

Mistress Presley wanted to punish her slave for not cleaning her socks the way she wanted them cleaned. She found they were dirty and she made him lick them. She wanted him to lick them clean but because it was impossible, she forced him to smell them as well as chew them before she made him wash them till they were as clean as if they were brand new from the shop.